Put Your Walls on a Diet!
Illusions of Space from the Rohm and Haas Paint Quality Institute

By Debbie Zimmer
The Rohm and Haas Paint Quality Institute 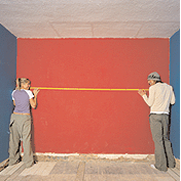 Did you know that paint color can actually alter the dimensions of a room? Well, it can’t literally do that. But it can alter how the dimensions are perceived, which is the next best thing. By taking a cue from fashion, your living space can be viewed as larger or smaller, taller or shorter.

A light-colored paint will make a small room appear bigger, for instance. And darker shades will make a large room seem much more intimate. These types of paint-induced optical illusions can be used with excellent results in almost any space. 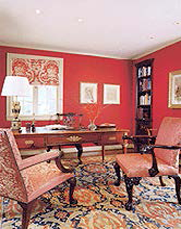 Try these simple tips to “adjust” your own living area:

1. Raise or Lower the Ceiling

If a ceiling feels too low, bright white can “raise” your perception of its height. By taking a cue from clothing designers, adventuresome homeowners can paint their walls with vertical stripes to enhance the sense of height.

On the other hand, dramatic high ceilings may cause a living space to feel cavernous. Add a mid-tone to deep hue on the ceiling to visually lower the height. Another alternative is to paint horizontal stripes on the walls. 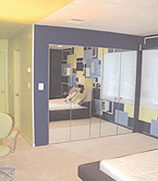 Just as a dark monochromatic outfit can visually “slim” an appearance, a monochromatic paint scheme can do the same in a large space. Choosing darker shade for the walls will reign in a large room and create a cozy and intimate space. And, as mentioned earlier, a light-colored paint will make a small room appear bigger.

Is your room too narrow and long? Just widen it by painting the shorter walls a deeper color than the longer walls. If color alone isn’t enough to change the perceived dimensions, use color combinations to create visual breaks. Divide your wall space horizontally with a chair rail and paint the upper and lower portions different hues. 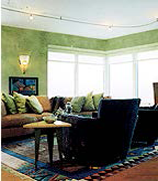 For both visual and practical reasons, selecting the right sheen of paint is just as important as the actual color. Glossier finishes lend greater warmth and depth to surfaces than do flat paints. For example, a room with white gloss paint on the ceiling will seem larger than a room whose ceiling is painted with a white flat paint.

Bob Seabrook, Has over 30 years experience in ICI and Residential construction. A past member of the Canadian Construction Association, building for Fortune 100 companies and private individuals , working with owners, architects, designers, and engineers.
His customers receive help with specifications, samples, prototypes, and budgets. more here.


...Most of you may be familiar with the term "Building Permit," but for those of you who are not...

Heard Around The House

Bob Seabrook is a preferred builder of Houseplans.com

Sicard is credited as the inventor of the snow blower. Arthur Sicard lived on a farm when he was a boy, and used to sell milk. Finding that snowfall would prevent his selling of milk, he dreamed up an idea for a machine that would blow snow and clear up roadways.

In 1925 Sicard completed his first prototype, based on a concept he described in 1894.[2] He founded Sicard Industries in Sainte-Therese, Quebec and by 1927 his vehicles were in use removing snow from the roadways of the town of Outremont, now a borough of Montreal. His company is now a division of SMI-Snowblast, Inc. of Watertown, New York, USA, as well as a Canadian operation, Sicard SSI Group, Inc. in Knowlton, Quebec.

A blog (a portmanteau of web log) is a website where entries are commonly displayed in reverse chronological order. "Blog" can also be used as a verb, meaning to maintain or add content to a blog.Many blogs provide commentary or news on a particular subject; others function as more personal online diaries.

A typical blog combines text, images, and links to other blogs, web pages, and other media related to its topic.

The ability for readers to leave comments in an interactive format is an important part of many blogs.

Most blogs are primarily textual, although some focus on art (artlog), photographs (photoblog), sketchblog, videos (vlog), music (MP3 blog), audio (podcasting) and are part of a wider network of social media. Micro-blogging is another type of blogging which consists of blogs with very short posts.

An Internet forum is a web application for holding discussions and posting user generated content. Internet forums are also commonly referred to as Web forums, message boards, discussion boards, (electronic) discussion groups, discussion forums, bulletin boards, fora (the Latin plural) or simply forums. The terms "forum" and "board" may refer to the entire community or to a specific sub-forum dealing with a distinct topic. Messages within these sub-forums are then displayed either in chronological order or as threaded discussions.

Such forums perform a function similar to that of Usenet newsgroups and the dial-up bulletin board systems that were numerous in the 1980s and 1990s. Early web-based forums such as UBB.classic date back as far as 1996. A sense of virtual community often develops around forums that have regular users. Technology, computer games and/or video games, fashion, religion, and politics are popular areas for forum themes, but there are forums for a huge number of different topics. Internet slang and image macros popular across the internet are abundant and most widely used in internet forums.

Do It Yourself : Caulking

...When using caulking,there are several , factors to consider:...

are you using it for water, thermal or sound?,or to fill a joint in trim prior to painting?

issues of technique that may not be obvious to first-time users:

One day a group of engineers got together and decided that man had come a long way and no longer needed God. They picked one engineer to go and tell Him that they were done with Him.

The engineer walked up to God and said, "God, we've decided that we no longer need you. We're to the point that we can clone people and do many miraculous things, so why don't you just go on and get lost."

God listened patiently to the man and after the engineer was done talking, God said, "Very well! How about this? Let's have a man-making contest."

The man replied, "Okay, great!" But God added, "Now we're going to do this just like I did back in the old days with Adam."

The engineer said, "Sure, no problem." He bent down and grabbed himself a handful of dirt.